A limited edition made by Peter de Koningh.

A Contraforte by Guntram Wolf. 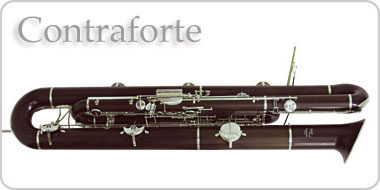 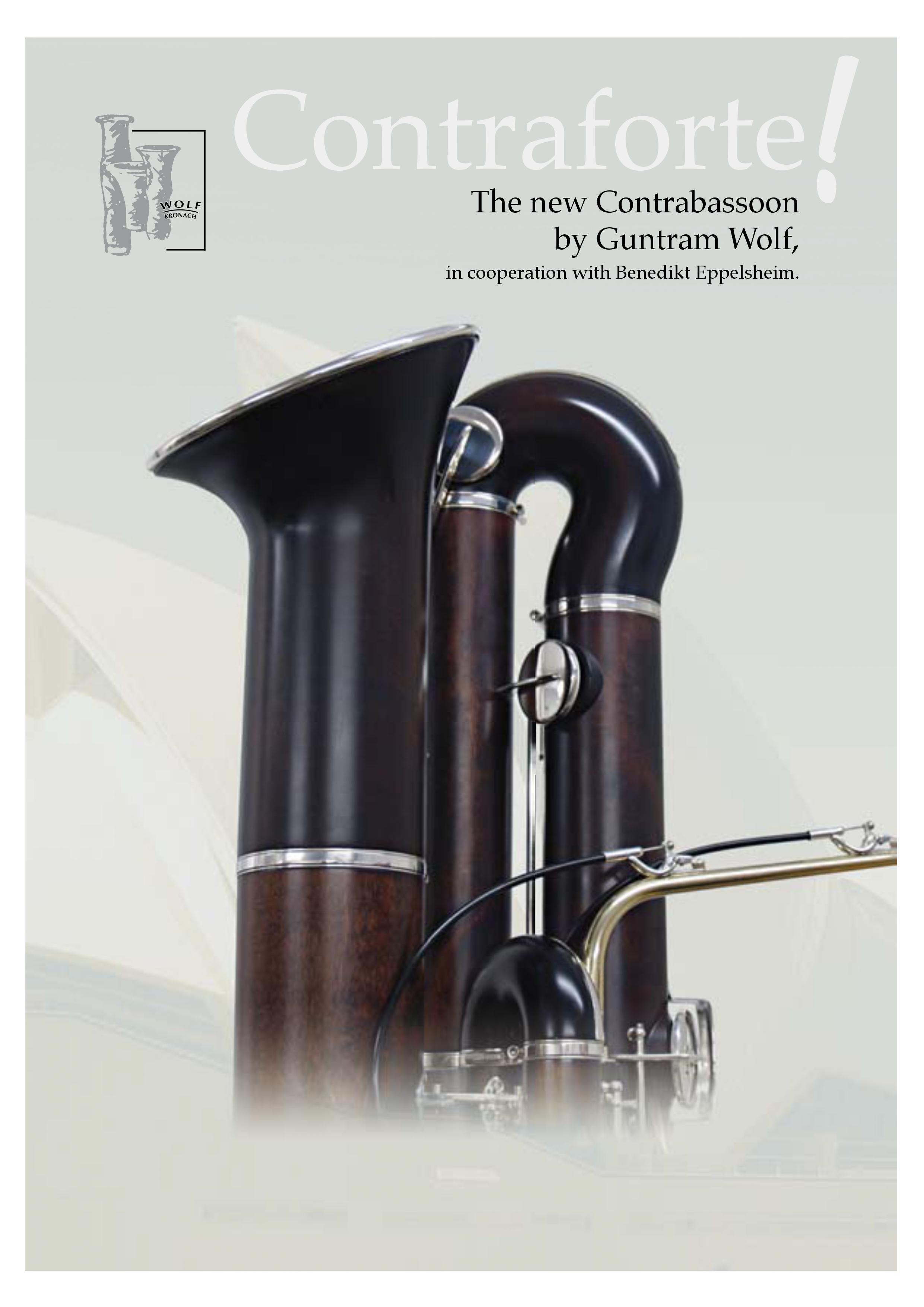 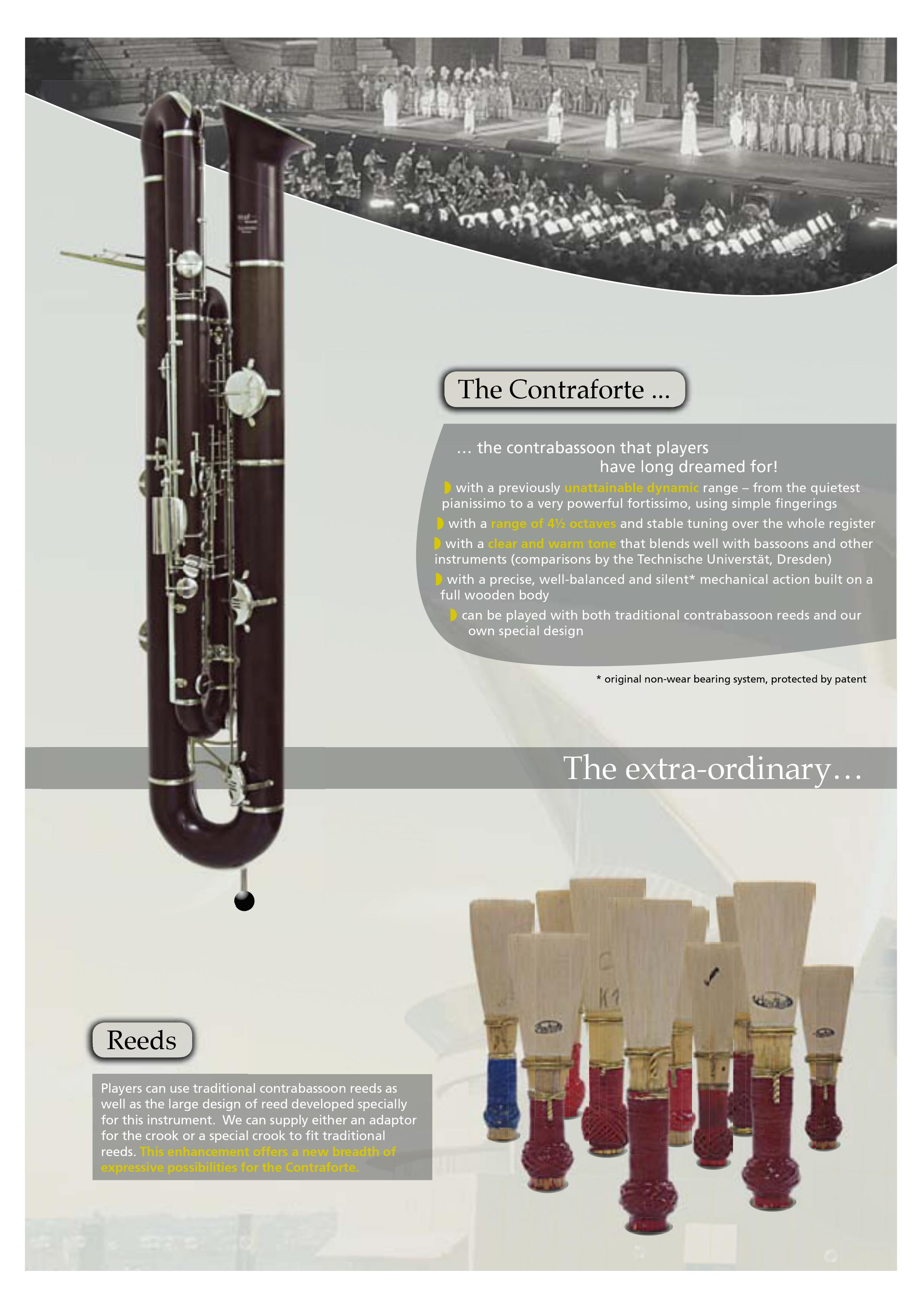 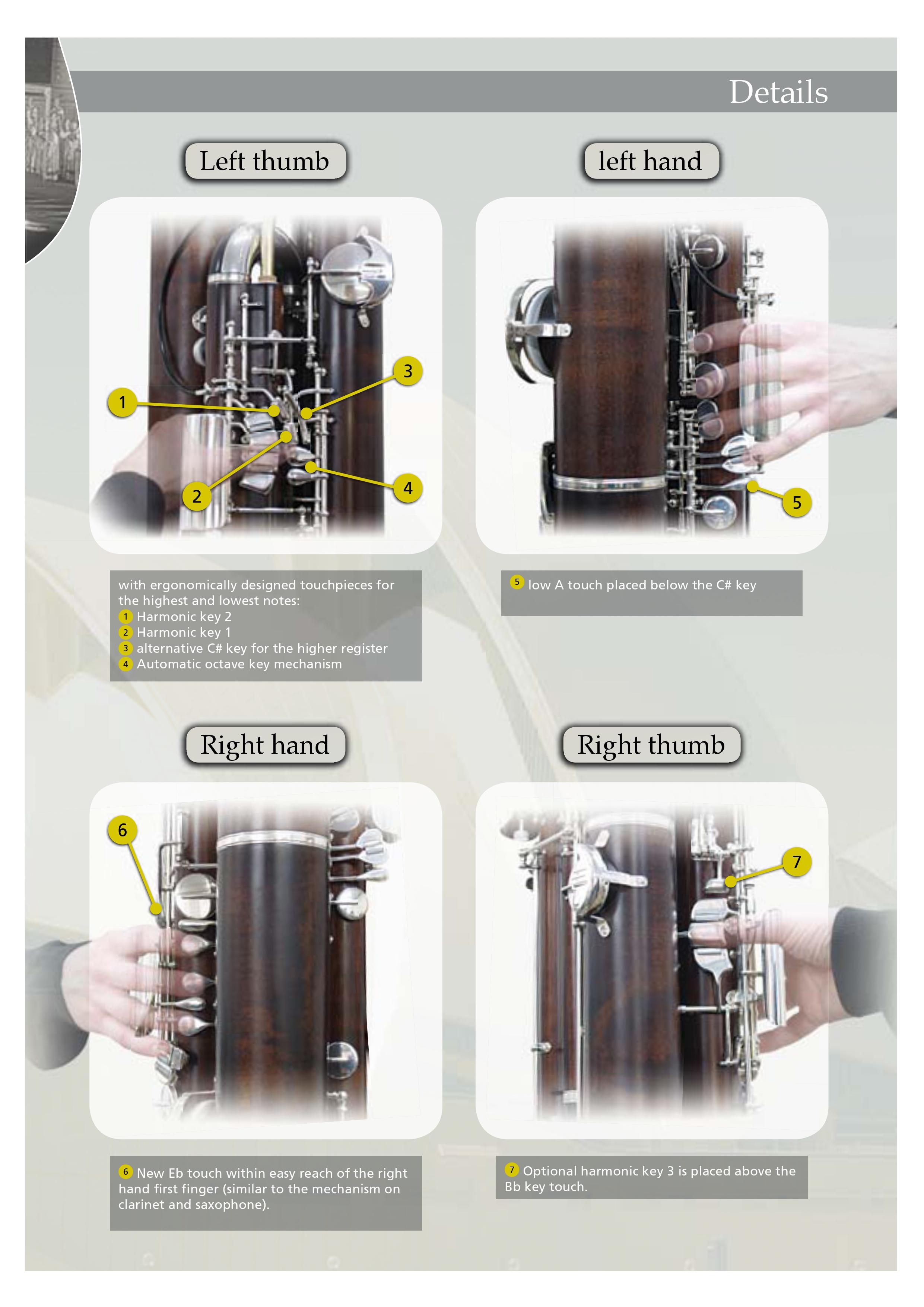 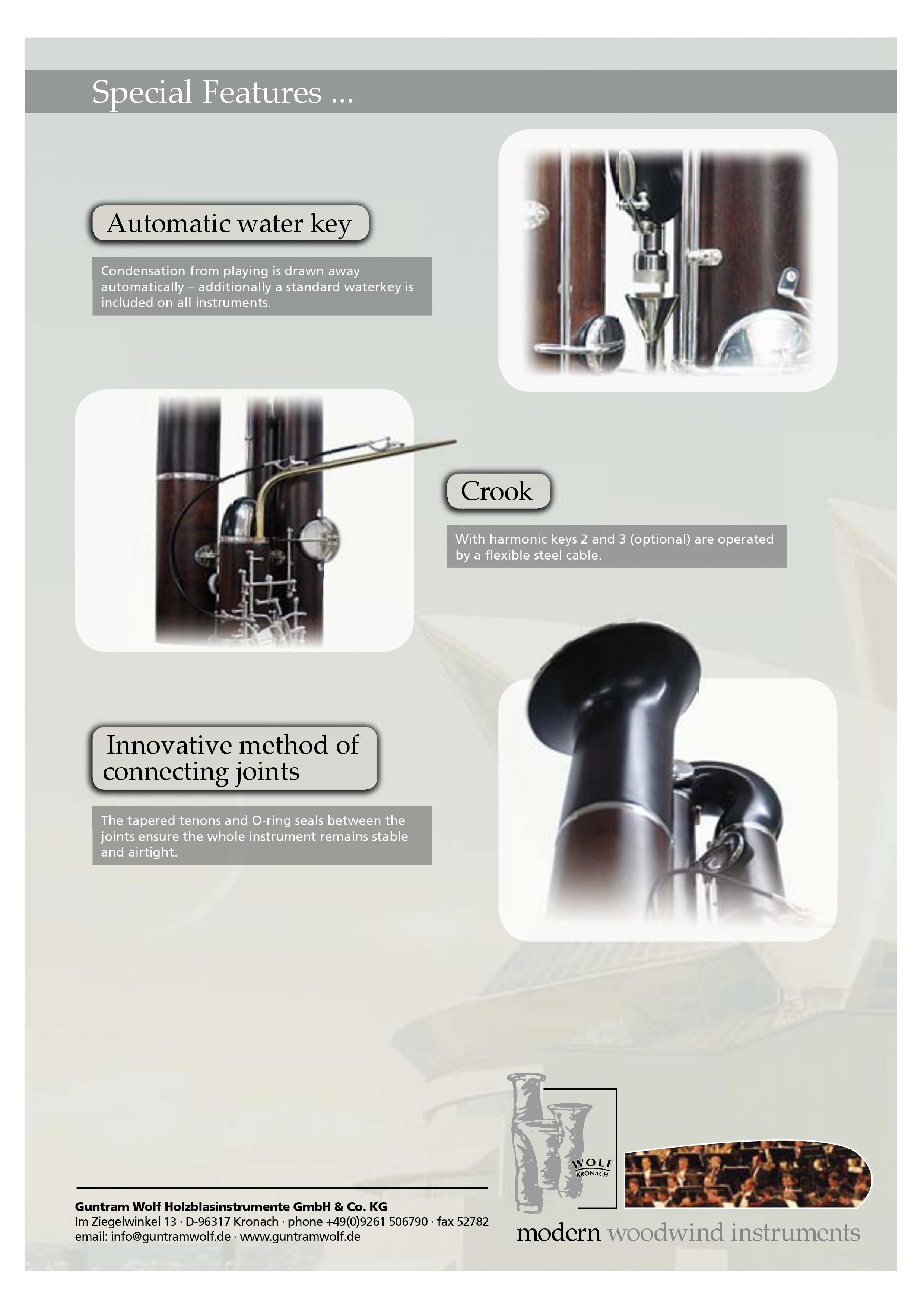 The owner of the contraforte is the Netherlands Wind Ensemble. 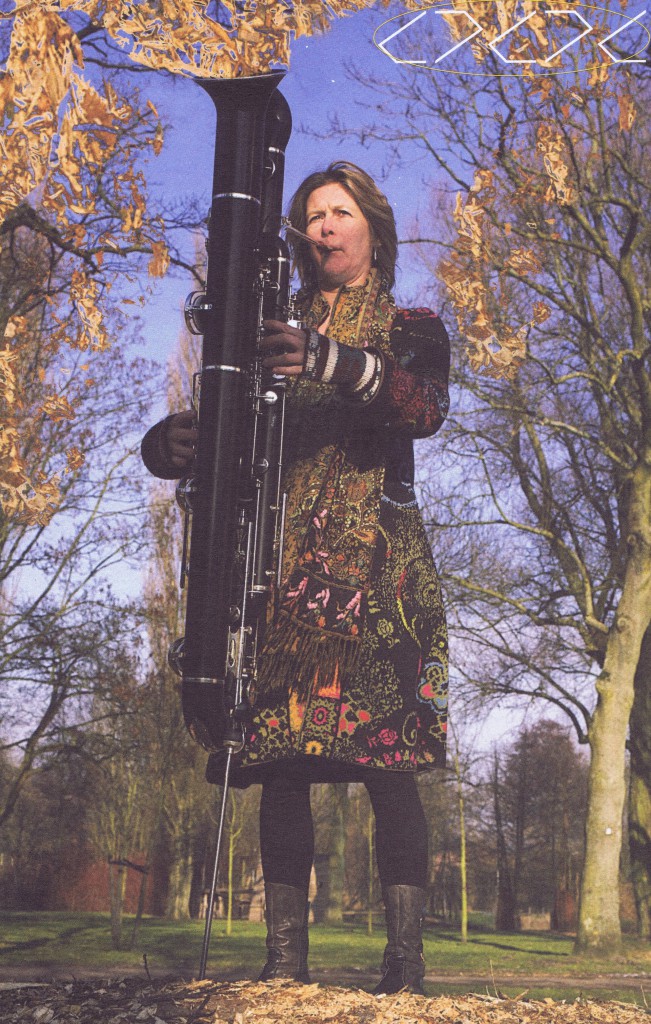 Since the early 1990s Marieke Stordiau has been a part of the core group of the Nederlands Blazers Ensemble/Netherlands Wind Ensemble (NBE). In this leading Dutch music ensemble she has shown her versatility as a musician, playing old as well as new repertoire and engaging with traditional and contemporary music theatre. The quest for the roost of musical interplay and performance leads the musicians of the NBE regularly to projects that employ only period instruments. Marieke’s passion for the contraforte (a redesign of the contrabassoon developed by Guntram Wolf), proved to be a source of inspiration to many composers and orchestrators that wrote pieces for the NBE. In 2007 Marieke also became a member of the Hexagon Ensemble, which consists of five wind players and a pianist. Together with this ensemble she develops inventive multidisciplinary projects: performances that connect music with visual art, contemporary multimedia programs and projects in which opera is adapted for music theatre. In addition to her performances at the NBE and the Hexagon Ensemble, Marieke is also involved with a variety of other projects, such as in Ludwig (Ludwig loves Barbara, Kinder Mattheus Picnic at the Olympics), Metropole Orkest (Cross links festival) and several other orchestras, including the Rotterdam Philharmonic Orchestra, the Netherlands Symphony Orchestra, The Arnhem Philharmonic Orchestra and the Royal Concertgebouw Orchestra.

Marieke Stordiau started playing the bassoon at the age of fourteen. Her first lessons were with Willem Ravelli. A few years later she studied with John Mostard and Brian Pollard at the Conservatorium van Amsterdam. She then started playing in the Rotterdam Philharmonic Orchestra when she was twenty-three. Under the musical guidance of chief conductors James Conlon and Valery Gergiev the orchestra did not only perform in the Netherlands, but also had many successful tours throughout Europe and in the United States, Japan and Korea.

For many years Marieke formed the duo Stordbak with pianist Marjolein Bakker. During that time, they played classic repertoire for bassoon and piano, but also performed new works by Chiel Meijering, such as I can’t get no satisfaction. Kees Olthuis wrote Toccato and Het Hemels Fagotje especially for them. This last work, with text by Dutch writer Annie M.G. Schmit, is a music theatre program that includes acrobats and a narrator and was performed for people of all ages. In 2001 Marieke decided to leave the Rotterdam Philharmonic Orchestra. Instead she choose for chamber music, the flexibility of freelancing and a world of folk tales.

Soon after that Marieke founded Stichting De Luie Vrouw. This foundation initiated performances centered around different folk tales and fables originating from a variety of cultural traditions. In changing chamber music formations and in cooperation with composers and narrators, she created exciting performances that combined music and storytelling aimed at both the young and the old. Together with storyteller Peter van der Linden, the foundation produced two successful CD’s: De Wolkenberg (Asian fairy tales) and De Twaalf Vensters van Kristal (Russian fairy tales). A television series about ancient Japanes tales was broadcasted on Dutch public television in 2002 by the renowned VPRO broadcasting company. Over the years, many performances took place in concert halls, schools and festivals. These programs focused on tales with evocative titles such as the Grateful Pine Tree, the Dancing Crane, the Samurai Warrior and the Zen Master. After seven years, the tales had been told.

In the heart of Val di Cecina between Volterra and the Etruscan coast is the sleepy village of Querceto, surrounded by fields and forests. The medieval castle of the family Ginori Lisci covers almost the entire Querceto. Count Lorenzo and his son Leonardo have in 20e century the village and neighboring areas cultivated. Querceto is now fully restored and a vibrant social and cultural life. From Querceto there is an enchanting view over the hills of the nature reserve of Monterufoli. www.castelloginoridiquerceto.it

20 minutes away is Bolgheri, known for the world-famous eponymous wine. 10 minutes away is the town of Cecina to the Etruscan Coast, where it is good to live with the many seafood restaurants. Inland is 25 km away Volterra with its Roman theater, Palazzo dei Priori and museums. Pisa is 80 km away, Florence 100 km. Arts, culture and Italian life are connected in this heart of Tuscany.

Libera Accademia Natura e Cultura organizes many courses in Querceto. The organization hosts artists from various European countries and provides plenty of room for their own interpretation of their workshops in the field of visual arts, photography, music, dance, sculpture and cooking. Parallel to the courses, there is a varied program of concerts and operas.
www.association-marcopolo.org

Give a boost to your bassoon game!

Central to this course are your personal wishes to you bassoon game in one week a boost. As of Sunday, there is a daily scheduled private lesson bassoon. Mariken also coaches you in three days with chamber music for bassoon and piano. On four afternoons there is a scheduled hour in occupations fagotduo up to quartets. Also there twice ensemble playing in short pop-up concerts. The week ends with a final concert by The Amsterdam Consort and exhibition ith painting of the painter parallel course. Then the afterparty can start. In short, a boost with maximum personal attention to your bassoon game. In addition to the joint program is a lot of room for personal interpretation.

Marieke Stordiau and Mariken Zandvliet are dedicated teachers who have earned their spurs in the music world. Marieke is since 1991 member of the Dutch Wind Ensemble and Hexagon Ensemble, gave many recitals, played 20 years in the Rotterdam Philharmonic Orchestra, and presented with Foundation Lazy Wife small music theater where fairy tales were the common thread. Mariken as répétiteur at the conservatories of Amsterdam and Utrecht. She not only accompanies many young talents during their training, but also provides with various chamber music performances at home and abroad.

Parallel to the BassoonBoost also other courses are available

In addition to BassoonBoost, there are courses for flute, viola and cello. Visual artist Dorine Kuiper will also teach a painting course from 2-9 July, which might be extended to a second week of teaching from 9-16 July. Depending on demand, a course for amateur choir singers will also be held from 9-16 July – with as its theme the opera Dido and Aeneas by Henry Purcell.

Painting course 2-9 July: Musicians and Singers, the nexus of visual art and music

Under the guidance of Dorine Kuiper, participants will be making paintings inspired by the musicians and singers that are staying in Querceto for concerts, the opera and courses. At the end of the week, all paintings will be exhibited on the eve of the performance by The Amsterdam Consort.

The participants of this workshop will produce paintings inspired by the fables of Leonardo da Vinci. They will taught by visual artist Dorine Kuiper. At the end of the week, the paintings will be photographed and digitally projected on a screen during the performance by The Amsterdam Consort. The combination of the projection with the recital of the fables and especially selected musical pieces form an ode to Da Vinci. The paintings wil also be exhibited at the eve of the performance. 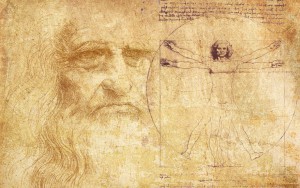 BassoonBoost is more than just a bassoon workshop. Together with the participants of the painting course we offer a trip to the world famous town Volterra and Cecina or Bolgheri, a winery that makes the eponymous wine, we see the sun at the beach and we eat on the coast near Cecina. In addition, see the opera Suor Angelica by Puccini (week 9-16 July) in chamber music and hear.

Do you want to register for the course?

Questions about the course?